Skip to Main Content
U of T ENGINEERING
Posted September 30th, 2013 by

U of T student-instructors gathered with some of their young charges from an innovative camp they helped run this past summer. The Big Ideas: Creativity, Design and Innovation Camp is meant to develop the next generation of business-savvy, science-literate entrepreneurs.

The camp, which ran for the first time this summer, drew 450 youth from across southern Ontario to various provincial universities. About 100 of those campers came to U of T for an in-depth experience in applying engineering and technology insights to business challenges.

Campers learned how to put themselves in someone else’s shoes and identify what users of technology need, and how to prototype a project to meet those needs. Finally, they learned how to develop a business strategy for making ideas and products successful in the real world.

He was recognized for his article ‘Nature’s Industrialists’ in the November/December 2012 edition of Chemical Engineering News, which featured the research of U of T chemical engineers Radhakrishnan Mahadevan and Emma Master. The article not only explains this cutting-edge research – which focuses on producing chemicals from biological materials that could eventually replace those made from non-renewable resources – it also demonstrates why this work matters to Canadians.

“It is important to inspire and invest in the development of young people that will fuel growth in research and innovation,” said the Honourable Keith Hutchings, Minister Responsible for the Research & Development Corporation. “I extend my congratulations to each of these students who have completed programs this summer which provided exposure to research areas that align with education and career paths relevant to Newfoundland and Labrador industries.”

Diana Vazquez, a DEEP student this summer, has launched STEM Kenada, an organization that connects female high school students in Canada with female students in Kenya through discussions on science, technology, engineering and math.

“On my trip to Kenya I witnessed the true power of education,” says Diana. “It transforms people entirely. Studies show that in countries where more women hold jobs in STEM fields, there are better economic, social and political opportunities for women. STEM Kenada is my contribution, to improve education for girls around the world.” 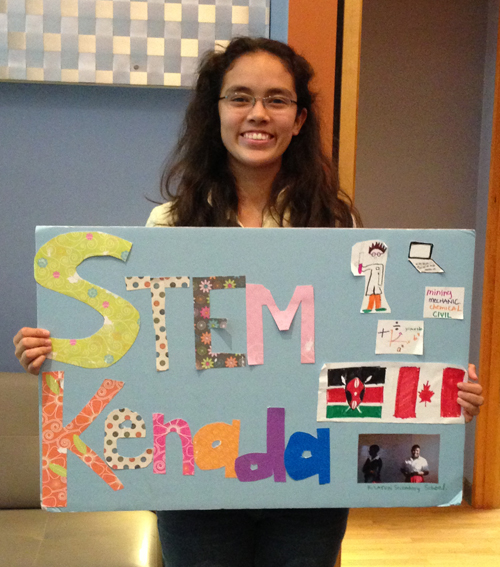 Approximately 1,500 of the Faculty’s newest alumni celebrated the end of their academic careers – and new beginnings – during two ceremonies at Convocation Hall on June 19. Among them, 932 undergraduates and 569 graduate students earned degrees (261 receiving MEng degrees, 203 obtaining MASc degrees and 105 earning PhD degrees).

A recent article published in The Globe and Mail highlights the important role U of T’s Engineering Outreach programs play in increasing diversity in the field.

While female students are now the majority in medical and law schools, engineering programs are still dominated by men. In 2010, women accounted for only 17.7 per cent of engineering undergraduates and 10.5 per cent of registered professional engineers in Canada.

“This is an issue because engineers are trying to solve complex, difficult and important problems,” says Susan McCahan, the University of Toronto’s vice-dean undergraduate for the faculty of applied science and engineering. “If we can increase the diversity of engineers, we’ll have greater potential to develop better solutions – ones that would not emerge if only one sort of person was addressing the problem.”

On the weekend of May 25-26, U of T Engineering empowered 90 newly admitted female students through a slew of activities at the Girls’ Leadership in Engineering Experience – also delightfully known as GLEE.

Now in its second year, GLEE is an initiative that aims to inspire graduating female high school students to join the U of T Engineering community. Attendees got the chance to learn more about student life and seek guidance from current engineering students, faculty and alumni. Events included a morning of hands-on workshops led by DEEP instructors, a lunch hosted by the U of T chapter of Women in Science and Engineering (WISE), a panel discussion with successful female alumni, as well as a semi-formal dinner with members of the U of T Engineering community.

How do you program a robot to navigate a zombie-infested campus? That was one of many problems that 88 high school students from grades 9 through 12 had to solve during the third-annual Operations Research Challenge (TORCH) on March 16, 2013. A team from Don Mills Collegiate Institute shared the $300 top prize and were invited to attend a week of DEEP Summer Academy.

Ali Mehrizi-Sani, a DEEP instructor in 2010 (Everyday Electrical Engineering), published a paper on the program in the November 2012 issue of IEEE Transactions on Education.

In addition to providing an overview of the DEEP program, the paper contains an in-depth analysis of the methodology Professor Mehrizi-Sani used to develop his introductory course on electrical engineering.

Read all about the team’s take on the Eiffel Tower and other design projects here.